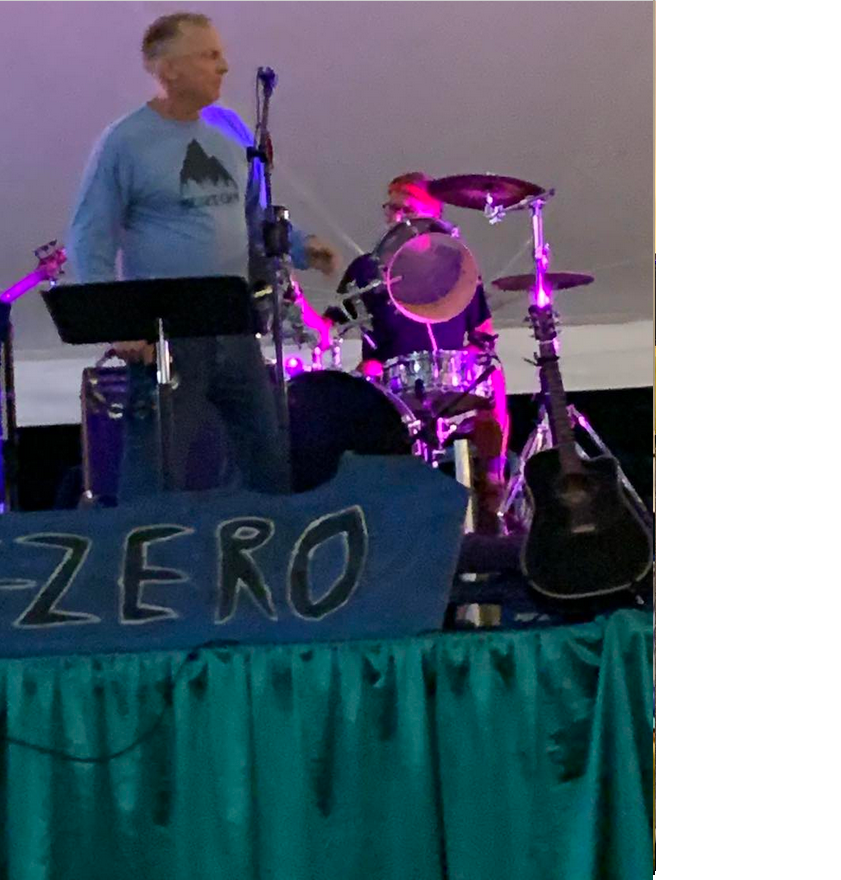 Woody Holmes / Drums   Woody is a resident of Summit, NY. and has been drumming since he was 12. He has been involved with many area bands throughout the years: Roadshow, RD-5 Electric city, Rubberband, and Crawfoot Stew just to name a few. Woody's son Adam, is also a drummer. Woody counts Ginger baker and Terry Bozio among his favorite drummers and cites Frank Zappa as his Music Motivator.

​Dennis: O'Neill / Rhythm Guitar and Lead Vocals   Denny is the lead voice of 5-Zero. Raised in Schenectady, NY and graduating from Linton High school, Denny now resides in Delanson, NY. He has worked as a solo musician for many years. Denny cites as his major influences the bands Yes, Rush, and Led Zeppelin. His favorite solo entertainer is James Taylor. When not singing with 5-Zero Denny can be found playing golf, snowboarding, mountaineering, and traveling.

Bill Trendell / Keyboards and Backup Vocals  Bill is from Schoharie, NY and has been playing keyboard over 40 years. He adds excellent backup vocals and harmony to the sound. Some of his previous bands were: Commonground, Exodus, Stagefright, Bill Bear Band, and Rubberband. Bill cites influences from Styx, and the Beatles but is especially influnced by Rick Wakeman, of Yes and Ray Manzarek of the Doors. Beside music, Bill enjoys traveling to Aruba and loves the NY Yankees and NY Giants.
Brian Trendell/Conga Drums

Brian Trendell / plays congas, bass guitar, and percussion. He also sang vocals with the Trendell Jam Band. Brian's favorite bands are Faith No More, Clutch, Talking Heads, and Dire Straits. His favorite musicians are Robin Trower and Carlos Santana. In addition to playing in the band, Brian is a serious painter and a fanatic Philadelphia Eagles fan.

Jay Wood  / Lead Guitar and Vocals    Jay was born in Poughkeepsie New York, and grew up in the nearby town of Fishkill. For his eighth birthday his dad bought him his first guitar, and taught him his first chords. Armed with a chord book and 2-45 rpm instructional records, Jay played night and day, and soon played well enough to join several school groups. In the mid-seventies Jay’s family moved to Summit NY. With a new environment, and new friends, Jay took his playing to the next level, and began playing lead, heavily influenced by the likes of: Jimmy Page, Elton John, Joe Perry, Neal Schon, Joe Walsh, Jimi Hendrix, Ted Nugent, and Allen Collins, to name a few. In 1986 Jay helped found the band “Von Rudder”, and continues to perform and record with the group to this day. Jay joined 5-Zero in January of 2015 as the lead guitarist, and also sings lead and backing vocals. In his spare time Jay enjoys trout fishing, the beach, and watching N.Y. Mets baseball, and N.Y. Giants football.

Tim Lape / Bass Guitar Player is from the Summit area nestled in the mountains of Schoharie County NY. Started playing guitar at the age of 14 but really was motivated playing it more when meeting Jay Wood in the summer of 1975. Jay & Tim would jam quite often at high school events and outdoor summer activities. It was not long that they both formed the band Grief Street and rehearsed regularly on a daily bases and then out gigging. As time pressed on Tim was asked to join Von Rudder to fill the position on bass guitar in the Fall of 1987 and recently has rejoined the group playing guitar. Tim also did some recording projects with the band BAR Stool Orphans which a CD was released in the Fall of 2011. The summer of 2021 Tim was asked to fill the bass guitar position of 5-Zero. After seeing the band perform it was a no brainer to take the position as the music they played was right with a horn section. Influences include: Led Zeppelin, Rush, The Doobie Brothers, The Who, Steely Dan, Lynyrd Skynyrd, Journey and so many more.

Dave Henry / Trumpet Leader of the Horns   Dave Henry is a Schoharie, NY resident and has been playing trumpet for over 20 years. Although 5-Zero is his first classic rock band, Dave has played with various jazz and brass ensembles throughout the years. One of his favorite passions is to write horn charts to existing classic rock songs. He is greatly influenced by Chicago’s Lee Loughnane and Lew Soloff of Blood Sweat and Tears' fame.

Jess Gould / Saxophone   Graduated with a bachelors and masters of music Ed from the Crane School of Music. I am in my 19th year of teaching, in my 10th year at Schoharie central school where I teach grades 5-8 instrumental music. My husband and I travel often and have taken groups of kids overseas 10 times. Biggest hobbies are cooking, traveling and hanging with my bulldog.


Barb Perry / Trumpet  Barbara is a native of Sharon Springs, currently residing in Cherry Valley, NY. She has been playing the trumpet and flugelhorn for over 40 years, participating in many different ensembles, including concert, drum and bugle corp, jazz, and now rock and roll. inspired by such bands as the Duke Ellington Orchestra, Chicago, Tower of Power, Earth, Wind and Fire, Sly and the Family Stone, to mention a few.  Early influences have included such legends as Louie Armstrong, Art Farmer, Maynard Ferguson, Cynthia Robinson and Al Hirt.